This Indian food guide is a cheat sheet for Indian restaurant menus. It covers the most popular Indian dishes — what they are, how they’re served & more! 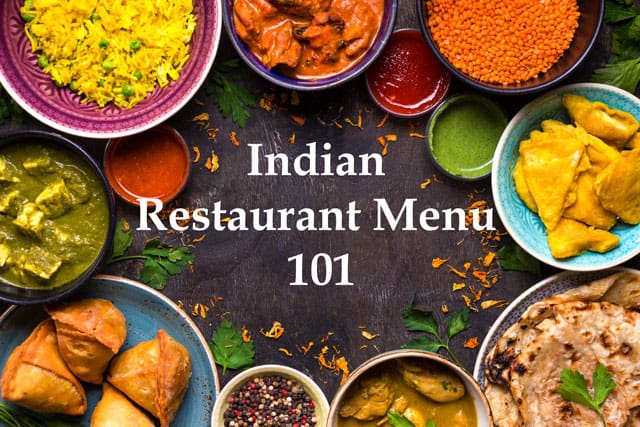 Why We Created This Guide to Popular Indian Food

The more I questioned people, the more I found out that it wasn’t that they didn’t like other Indian dishes, they simply felt intimidated by the names and did not understand them.  The irony here is that Indian food names are quite simple.  The dishes are usually named after the main components or where they come from. But given that fact, if I did not understand the language, I’d be confused too.

So consider this my effort to make things right. Here’s a rundown on what you commonly find on a typical Indian restaurant menu. Now next time when you go to your favorite Indian restaurant to enjoy a meal, use this guide to the most popular Indian dishes and order something outside of your comfort zone. There’s a good chance you will be surprised to know how much goodness you were missing out on!

If you would like to enjoy Indian food at home, you can purchase our products. They are at a store near you, or you can make the most popular dishes at home with our Home Chef Collection products. 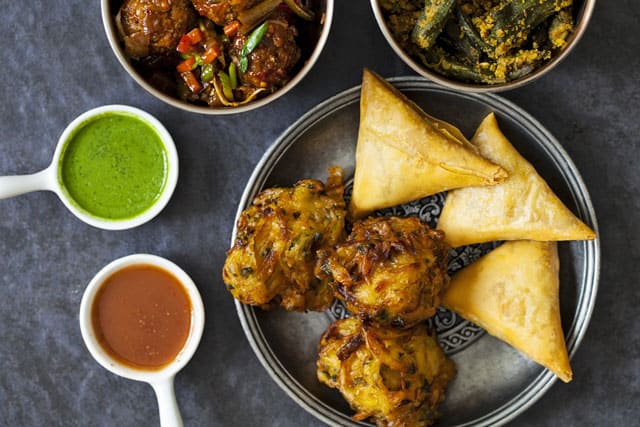 Being the foodie country that India is, there’s a meal planned around every time of the day and food available in every corner. Appetizers served in Indian restaurants are typically popular Indian street foods.

Bhajji: Bhajji (or Pakoras) are crispy deep fried dollops of spicy chickpea batter served with spicy condiments called chutney. Onion bhajji features thinly sliced onions that have been added to the chickpea batter and then deep fried to crispy perfection.

Samosa: Another popular Indian street food is the samosa. Samosas contain a small amount of spicy potato or meat filling  that are then wrapped in dough and deep fried until crispy and flaky.

Vada Pav: Vadas are deep fried dumplings or flattened patties of potato, and a pav is a plain old dinner roll. Vada pav is essentially a spicier vegetarian version of sliders where the dumpling or patty is sandwiched between two halves of a dinner roll. Oftentimes, condiments are added to the mix (often a green mint and cilantro chutney). 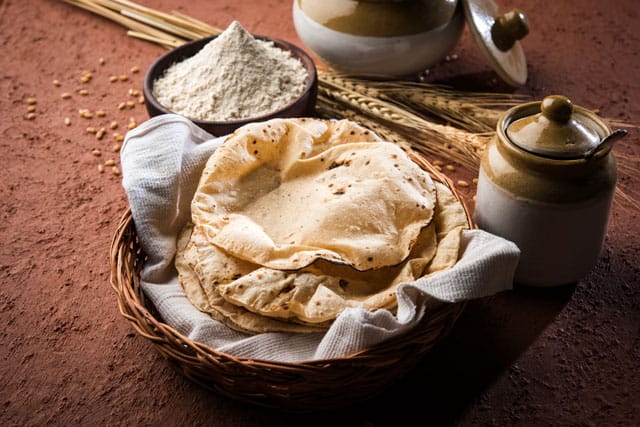 Breads in India are mostly flatbreads. It’s the way they are cooked or the type of flour used to make them that determines what they are called.

Naan: Naan is one of the most popular Indian flatbreads. To make a naan, wheat flour dough is prepared either by allowing it to rise using yeast, or by the addition of yogurt to the dough. That dough is then rolled into flatbreads and cooked in an Indian oven, called a tandoor.

Roti: Naan is popular on Indian restaurant menus, but roti is a staple in Indian homes. Roti is a no fuss Indian bread, typically made with whole wheat flour that’s kneaded into a soft dough, then rolled into thin circles and cooked on a tava (Indian skillet) on the stovetop.

Paratha: Paratha is a flatbread that is layered and pan fried. They are made with wheat flour, and ghee or oil is smeared between layers of dough while rolling them. But there are many ways in which you can make a paratha, specially stuffed paratha. A Stuffed Paratha is when filling is stuffed into a ball of dough and then rolled into a flatbread.

Poori: Poori are flat circles of dough that have been deep fried in ghee or oil until they puff and become slightly crispy on the outside. Typically served with aloo ki sazi (stir-fried potatoes), this is a beloved comfort food in northern India. 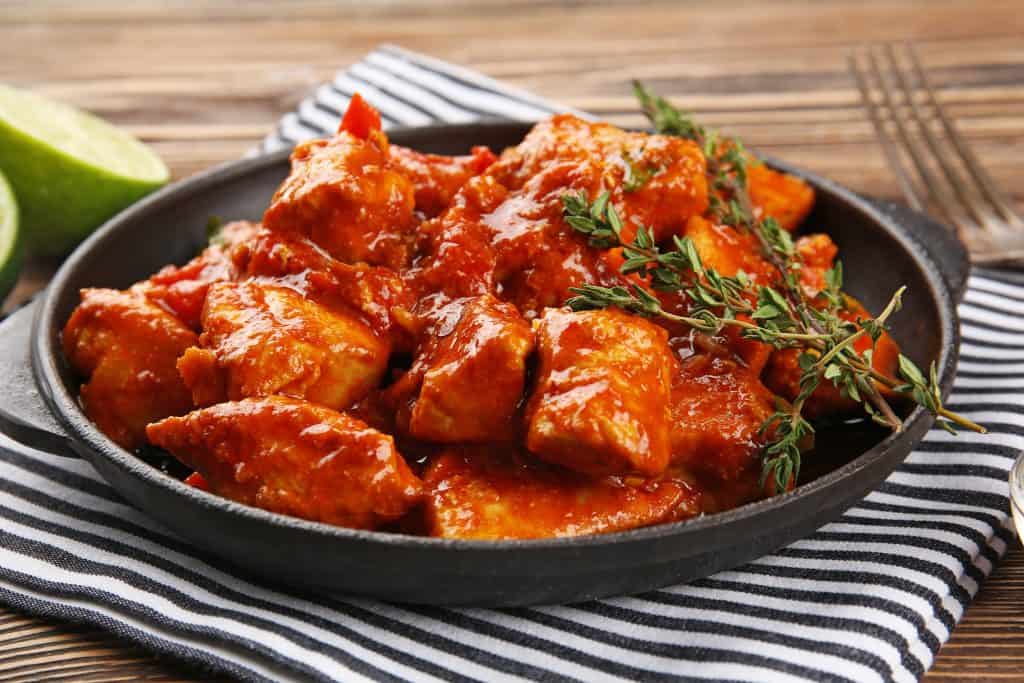 Tikka Masala: Tikka is the Hindi term for “small chunks,” and masala means a spice blend. So when small chunks of anything, like chicken, are cooked in a sauce with a particular spice blend, it is called Chicken Tikka Masala. The same way when paneer comes to the play, it is called Paneer Tikka Masala. The world famous sauce used in tikka masala is mainly tomato-based, with some richness added by cream or thick yogurt.

Chana (Chole) Masala: Chana or Chole is the Hindi name for chickpeas. Chana masala is simply chickpeas cooked in an onion, ginger, and garlic-based sauce with garam masala added to it. This is a popular North Indian curry; it’s spicy and packs a punch. It’s typically served with soft and flaky bread called Bhature, or with a baked, pillowy bread called Kulcha.

Saag Paneer: Saag is simply the Hindi name for leafy green vegetables. But this particular dish refers to a delicious curry where spinach is cooked with spices and then diced paneer (an Indian cheese) is added to the dish. At some Indian restaurants, you can also find this dish under the name of Palak Paneer, where palak is the Hindi word for spinach.

Korma: Korma is a preparation where protein is cooked with a yogurt-based sauce flavored with ginger and garlic. Fried onion is added to thicken the sauce and that is what also gives it a hint of sweetness.

Rogan josh: This dish hails from the beautiful northern state of India, Kashmir. With its roots in Persian cuisine, this dish is traditionally cooked with lamb or goat. Rogan josh consists of pieces of lamb or mutton braised with a gravy flavored with garlic, ginger and aromatic spices (cloves, bay leaves, cardamom, and cinnamon), and some versions incorporate onions or yogurt.

Vindaloo: When the Portuguese came to India and established their colony in Goa, they also brought with them their cuisine. And when that Portuguese food married with Indian flavors, several good things happened. Vindaloo curry is one of the products of that. Fiery and flavorful, Vindaloo is traditionally made with pork, marinated in wine vinegar and garlic.

Dal: Dal is the hindi name for lentils, and it broadly refers to all lentil soups in an Indian cuisine. Typically, the lentils are mixed with water, turmeric, and salt, then cooked to perfection.

Biryani: A very popular Indian rice dish with its roots in the Mughal empire in India, Biryani is a rice dish prepared by several layers of rice, some kind of spiced meat, paneer or vegetables and some added richness with ghee or yogurt and then finally slow cooked to perfection. There are a variety of options when it comes to Biryani: 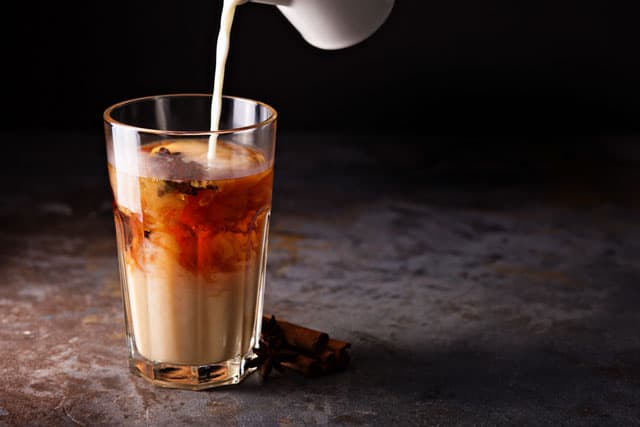 Chai/Tea: The Indian name for tea is Chai. You make chai by cooking a certain ration of water to milk, then add sugar as a sweetener and black tea together. And yes, when your order a “Chai Tea Latte” at Starbucks you’re ordering a “Tea Tea Latte.”

Masala Chai: This is when you add some kind of spice (masala) to the concoction above, and that makes it Masala Chai. A typical masala chai has a blend of cardamom, cinnamon, pepper and ginger cooked in chai.

Lassi: A sweet yogurt drink traditionally made by thinning out yogurt with milk or water and then sweetening it for more flavor. Cream is added to the drink too to make it richer. Lassi can be made into different flavors simply by adding various fruits, additional flavorings, etc. For example, mango lassi is made by mixing mango and yogurt, whereas strawberry lassi contains fresh strawberries, etc.

Chas: A savory buttermilk drink that has just a kick to it (because most Indian dishes have a kick to it!). This drink is usually enjoyed after a meal, as the use of cumin, mint and rock salt aids for a good digestion. 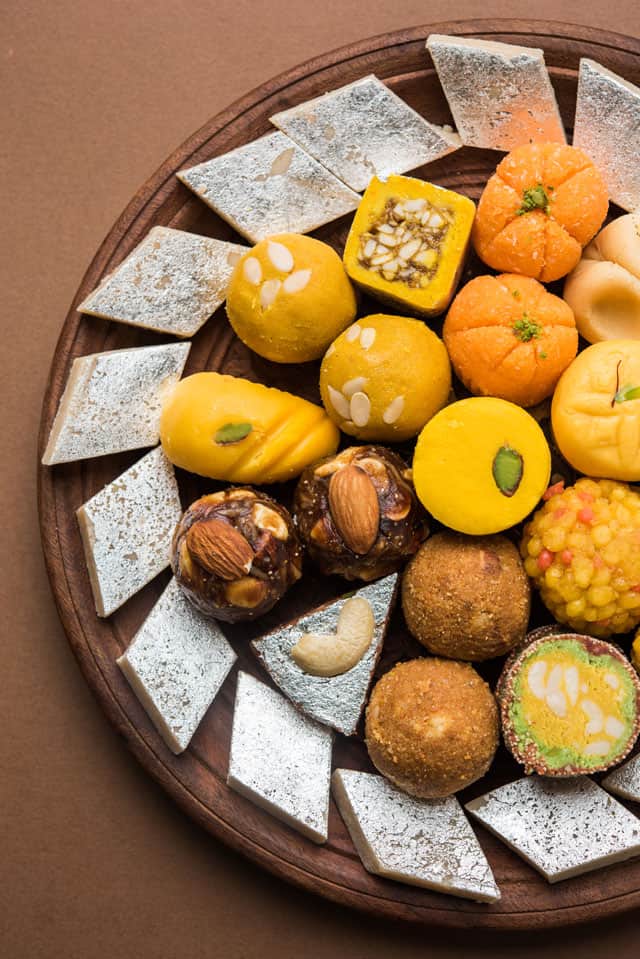 Gulab Jamun: If Chicken Tikka Masala (or some might say Butter Chicken) is the king of Indian curries, then Gulab Jamun is definitely the king if deserts. Milk solids are crushed into powder and then mixed with milk in order to knead into a smooth dough. The dough is then rolled into small balls, deep fried, and dunked into a sugar syrup until the balls absorb the syrup and become soft and juicy.

Halwa: Halwa is a pudding made with any variety of flour — like chickpea flour, wheat flour, semolina or root vegetables — that’s cooked with sugar, ghee and water/milk.

Barfi: Barfi is essentially a more solidified form of a milk-based pudding. In this dish, a sweet batter is thickened and then set to cool and cut into smaller pieces.

Curry: Often confused with the term “Curry Powder,” the word curry just means gravy. There is no flavor associated with “curry,” but traditional Indian curries have very little in common with the Curry Chicken Salad at your local grocery store.

Masala: Any mixture of spices.  One of the most common is “garam masala,” which translates to warm or hot.  These are the spices that make the body warm.

Saag: Greens. Most often spinach but can be mustard or other greens. “Palak” is specifically spinach.

Paneer: Indian Cheese. The only cheese used in Indian Cooking.

Tandoor: Clay oven. Anything that comes out of clay oven will usually be preceded with Tandoori. (Tandoori Naan, Tandoori Fish, Tandoori Chicken, etc. )

Chutney: Condiment. Most people are familiar with the fruit chutneys, like mango, but some of the best chutneys are herb based like cilantro and mint.

Thali: Literally means a plate, but in the context of Indian cuisine it mainly refers to a way of serving food. Several dishes are served on the same plate, and you essentially start an appetizer and finish off with a desert or a cooling drink.

74 responses to Indian Food 101: Your Guide to an Indian Restaurant Menu