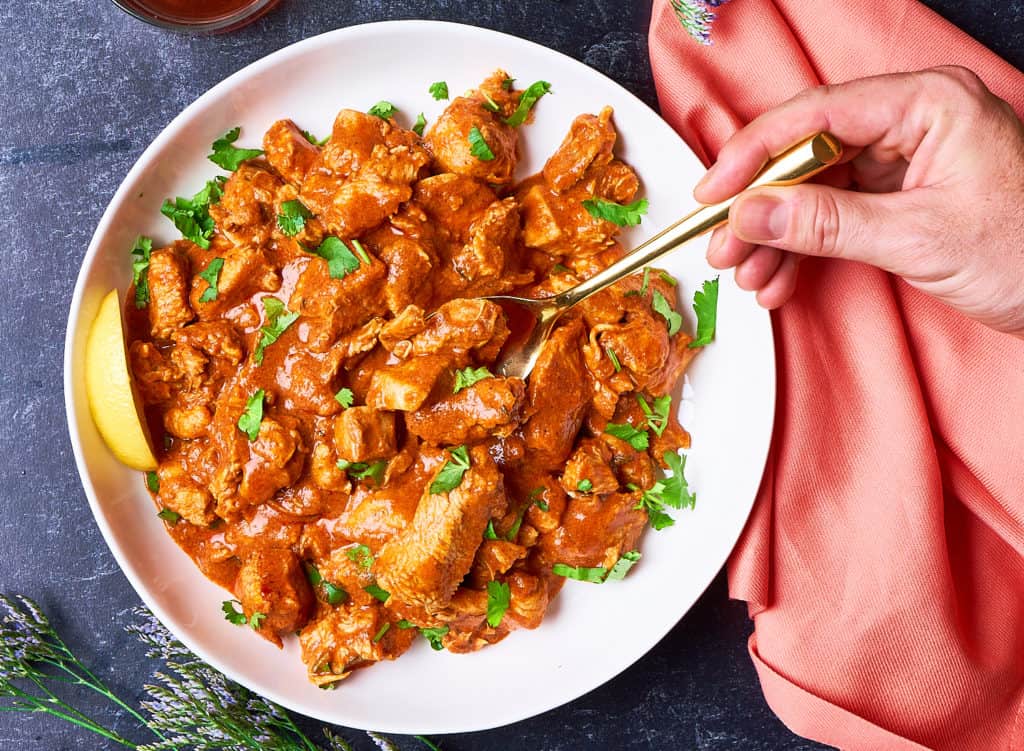 Wondering what chicken tikka masala is? Here’s everything you need to know about this Indian dish, including its origins, ingredients, and more!

There’s nothing quite like sitting down to a piping hot plate of chicken tikka masala. This world-renowned dish, with countless regional variations, can be found in Indian restaurants around the globe.

Although its origins are hotly contested, the creamy, spiced curry and tender chicken can be enjoyed by anyone, anywhere. So, what exactly is the story behind this popular entrée? Let’s start by digging into its mysterious origins. 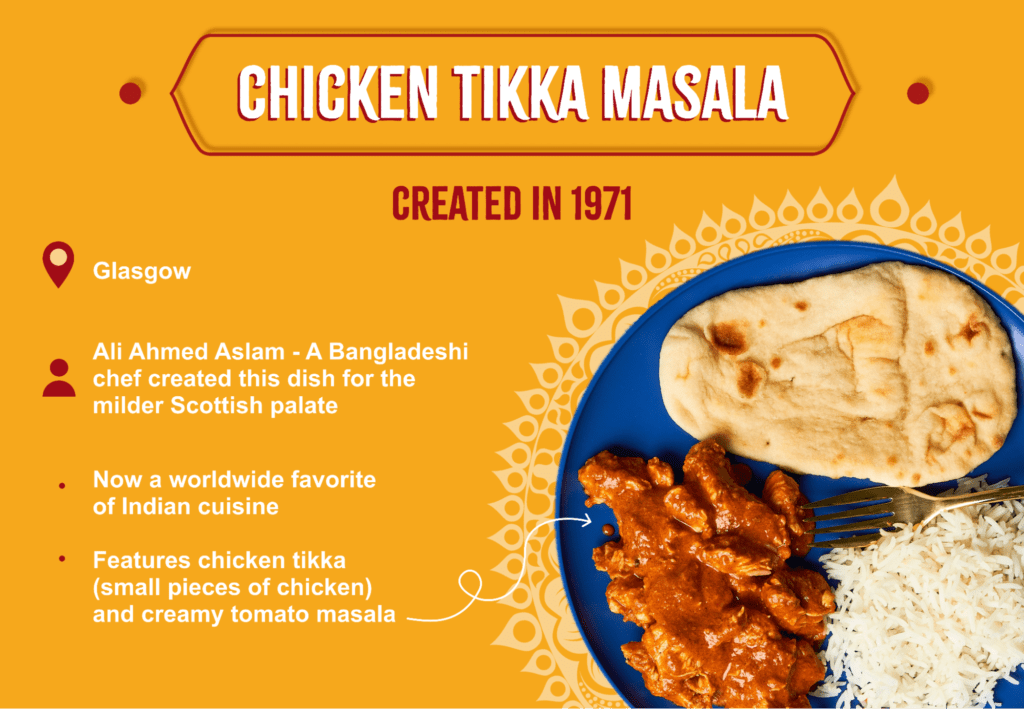 The Origin Of Chicken Tikka Masala

As we’ve eluded to, the origin story of the chicken tikka masala is the stuff of legends. While many people assume that this dish originated in India, the most popular origin story places its roots in Scotland when a Bengali chef had to improvise in a jiffy. Today, many consider it to be the national dish of the UK. The dish is celebrated for embracing the diverse and ancient heritage of the islands.

However, there is considerable debate around this topic. Due to its complex history,  widespread adoption, and variety of preparation, the dish’s exact beginnings may never be fully known.

No discussion of chicken tikka masala history is complete without the story of the Ali family. On a dark and stormy Glasgow night in 1971, an off-duty bus driver stopped in at a local Indian restaurant for a plate of chicken curry. The chef, Ali Ahmed Aslam, delivered his dish, but the bus driver was displeased and returned it for being too dry.

In a pinch, Ali used what he had on hand – a simmering, creamy tomato soup – to moisten the dish. The bus driver enjoyed his new plate so much that he regularly returned for years, bringing his friends and family to enjoy Ali’s new creation. Thus, chicken tikka masala was born.

Of course, there are those who doubt the veracity of this tale. Some food historians claim that the dish is simply a toned-down version of similar, spicier dishes in the Punjab regions of India. They believe the dish dates back much further, possibly even originating in the 1940s.

So, while some say the dish began in Britain, it still originated from Bangladeshi chefs who devised it as a means of pleasing the milder Scottish palate.

Whatever the case, nearly everyone agrees on a few key points. First, the dish involves chicken tikka (small pieces or bits of meat) and creamy tomato masala. Second, chicken tikka masala is now a delicious, worldwide favorite among the wide offerings of Indian cuisine. Indian restaurants from North America to Asia prepare it as a feature dish, and some of the world’s top chefs offer it on their menus.

Along with vindaloos and butter chicken, it is likely the most widely known  Indian dish on Earth. This brings up the much-debated question: what’s the difference between chicken tikka masala and butter chicken? 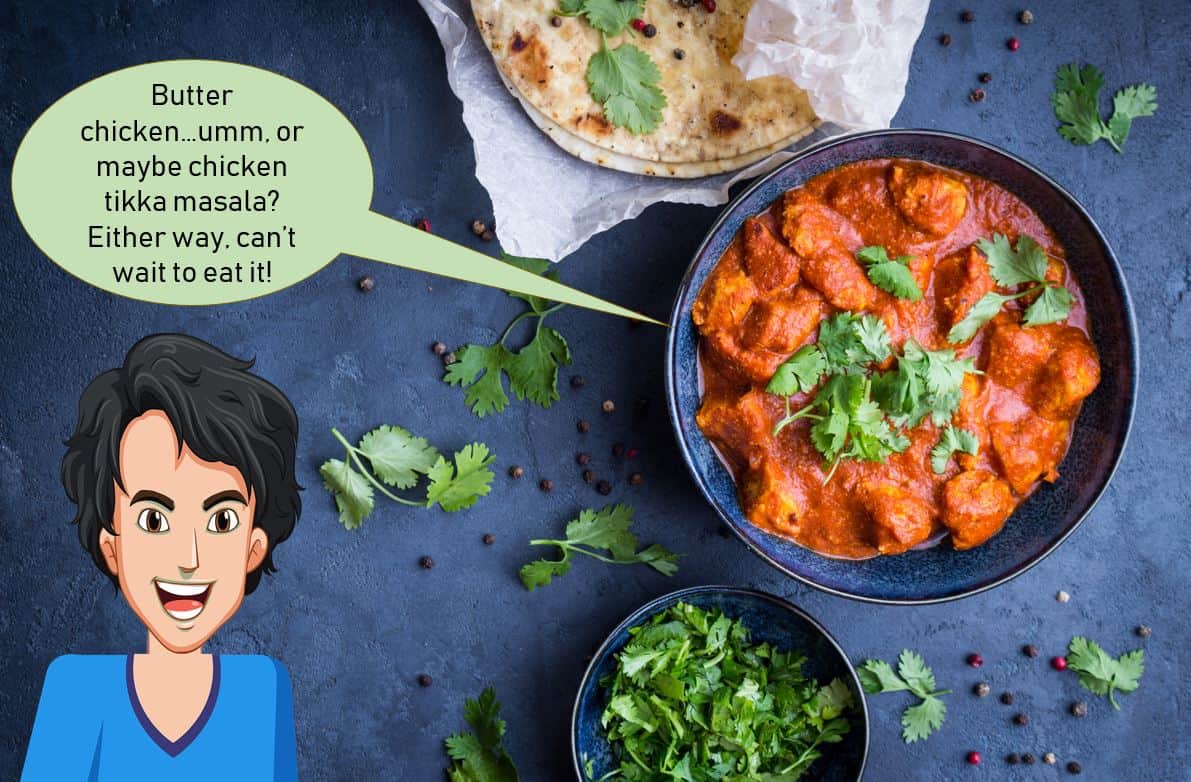 Funnily enough, even many Indians get confused when asked to distinguish chicken tikka masala from butter chicken.

Bearing a strikingly similar orange tinge, these two curries not only make for look-alikes but are also the top contenders in the ‘most popular Indian curry’ category.  Moreover, the countless regional variations make it harder to tell the difference. So, what really sets these two dishes apart?

Simply put, butter chicken is richer in butter. Easy enough. This ingredient is added in abundance to make the tomato sauce creamier and lend a certain sweetness to the palate. Chicken tikka masala is the spicier variant, carrying more nuanced flavors.

Unlike chicken tikka masala, the origins of butter chicken are far from disputed. It is universally acknowledged that butter chicken is the invention of Kundan Lal, the founder of the famous restaurant Moti Mahal in New Delhi, India.

Kundan realized that much of his tandoori and roasted chicken was wasted due to its dry texture. So, he crafted a solution with the creation of this curry-based recipe. Little did he know then that his utilitarian recipe was on its path to becoming a global delicacy, one that’s recognized as ‘butter chicken’ today.

Now that you’re up to speed on the history of chicken tikka masala, these questions must be on your mind: What goes into it? What makes it so delicious? And how can I get some of my own? 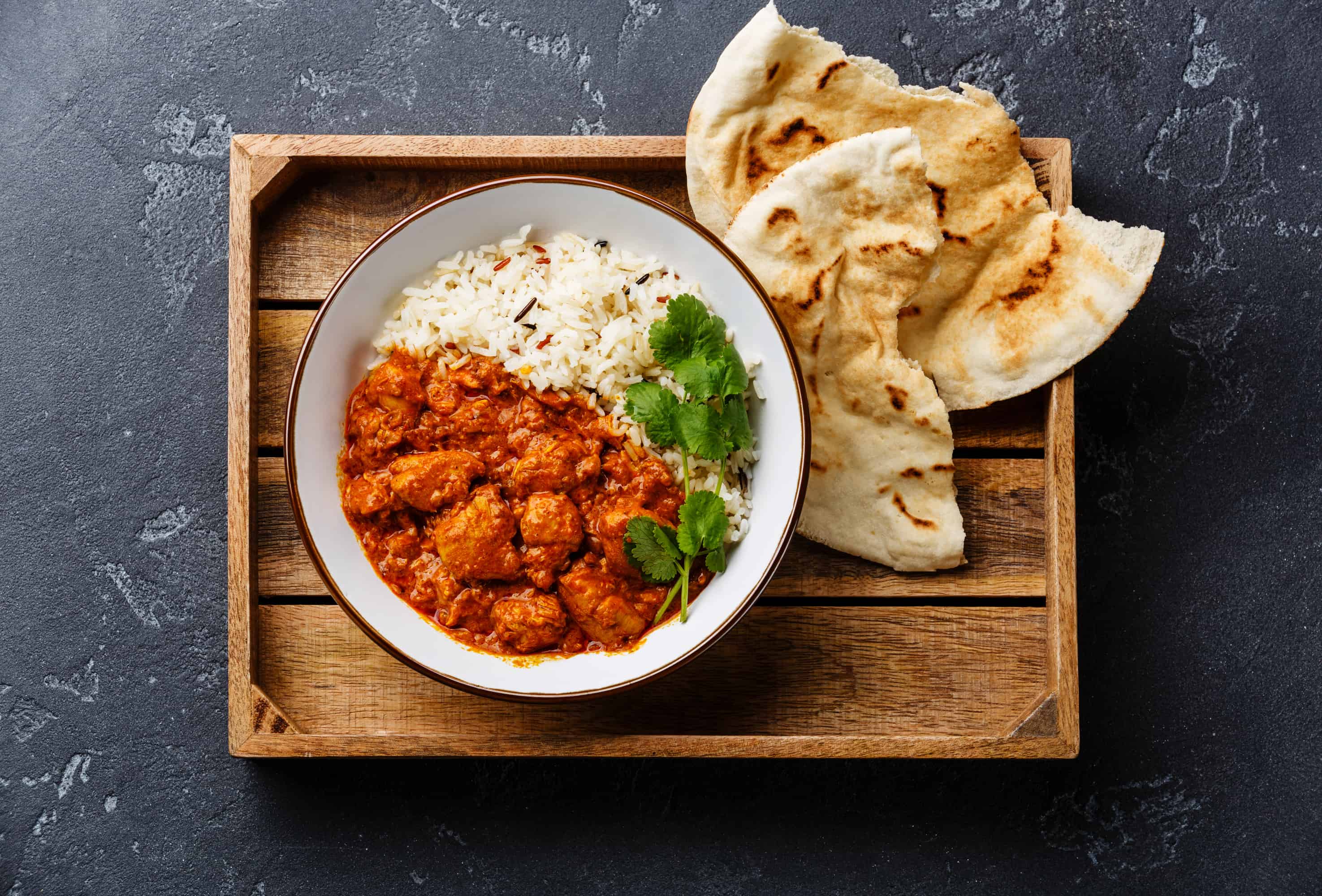 Chicken tikka masala can be found at your local Indian restaurant, prepared at home with a recipe, or bought prepared from Sukhi’s.

Wondering how to make this world-famous dish at home? It’s simple: you start with boneless chunks of marinated chicken, broil it, and then let simmer in a spiced tomato curry with a touch of cream. Here’s an easy chicken tikka masala recipe:

As history teaches us, the most important element of the dish is moist and tender chicken. Letting the chicken marinate in a mixture of plain or Greek yogurt and spices like chili powder or garam masala infuses a rich texture and makes the meat tender. Fortunately, our Sukhi’s Tikka Masala Curry Paste delivers this flavor effortlessly in less than 15 minutes!

Chicken tikka masala is also not complete if it isn’t served hot over warm basmati rice and with a side of freshly prepared naan. While these sides may cost you a little extra in the restaurant, they’re worth it. Luckily, they come ready-made with Sukhi’s frozen chicken tikka masala.

If you swear by the Instant Pot, we’ve got you covered. Chicken tikka masala, believe it or not, can taste finger-licking good even when prepared in the Instant Pot.

Here’s an elaborate, step-by-step recipe for making the dish. For the health conscious, this variation of the Instant Pot chicken tikka masala is ideal. Sukhi’s curry sauces also work well with the Instant Pot!

Whichever way you choose to prepare your chicken tikka masala, the result is an iconic dish that is sure to please, whether you’re eating on the go or hosting an upscale dinner party. 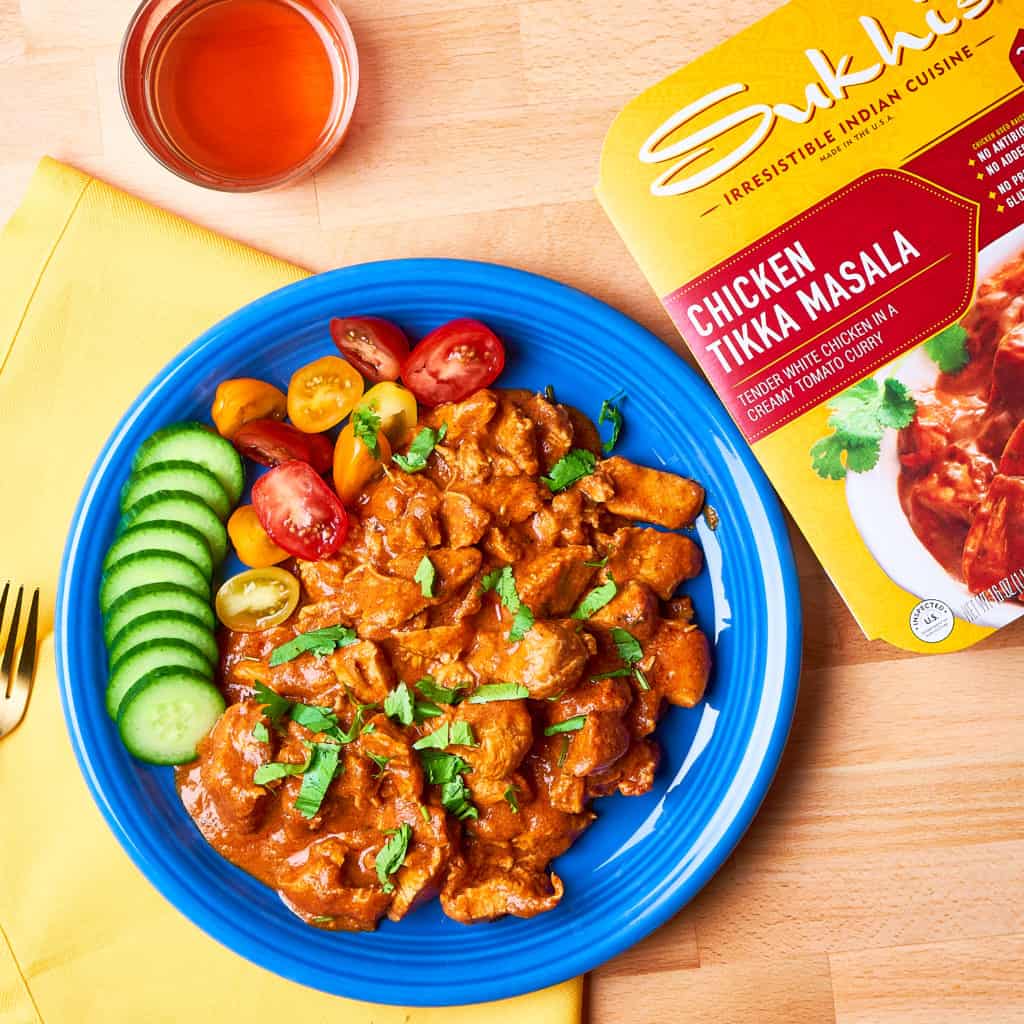 Now you know not only what goes into this delectable dish and how it’s made, but also its history, where it came from, and why it’s so loved. Use this knowledge to hone your skills in the kitchen or to impress your friends with the history of Indian food!

We hope you’ve enjoyed learning about one of our absolute favorite meals, both to serve and to eat, here at Sukhi’s. Browse our products to try some for yourself, or look through our other blog posts to learn more about the cuisine we’re so proud to offer!

Have more questions about unconventional chicken tikka masala recipes? Have you tried the plant-based variation of vegan tikka masala? Let us know in the comments below, or reach out to us on Instagram, Twitter, or Facebook!