Lamb Rogan Josh is a delicious curry dish, traditionally made with red meat like lamb or goat. Rogan Josh gets its rich, red coloring from alkanet flower/root and Kashmiri chilies. Rogan Josh, also known as Roghan Josh or Roghan Ghosht, is aromatic and uses an unmistakable curry.

Originated in the Kashmir region of India, Rogan Josh is a widely popular dish worldwide.

The word ‘Rogan’ means ‘oil’ in Persian or ‘red’ in Hindi and the word ‘Josh’ means passion, as in fiery or hot. So, Rogan Josh is cooked in oil and over high heat, which is where it gets its name!

What is Rogan Josh Made of:

Rogan Josh has a couple of different variations, with some of the new adaptations containing tomatoes.

Is a Rogan Josh Spicy:

Rogan Josh is considered to be a semi-spicy dish, being more spicy than your standard Biryani, but not as spicy as a Phaal dish. The Vindaloo sauce tends to be spicy, so that’s what packs the most heat in the dish. You can make it a little spicier by adding a jalapeno to the sauce for an extra special kick!

What’s the difference between butter chicken and Rogan Josh:

Using red meat like lamb or goat, Rogan Josh tends to be spicier and traditionally doesn’t use tomatoes in the sauce. It gets its rich color from the spices in the curry sauce.

How do you make a Rogan josh:

When making Rogan Josh, you heat up the oil first at a high heat and add your cloves and cardamom to fry, followed by your chilies and cumin. From there, you add your lamb or goat and cook for 5 to 6 minutes. Then, you cook on low for about 12 minutes. Mix your yogurt with all of the remaining spices and add to the pan. After it cooks for one minute, add one cup of water and leave to cook.

If you’re making a traditional Rogan Josh, after the meat is braised, the slow oven cooking method is used, also known as Dum Pukht. If you choose to do it this way, you’ll need to block out at least a few hours for preparations and cook time. You’ll need to cook it for at least 2 hours. You can salt to taste and serve it up with some naan or rice.

If you don’t have time for the traditional cooking method of Lamb Rogan Josh, this section is for you!

We’ve converted the recipe in an easy-to-follow Instant Pot recipe.

First, you heat the oil in your Instant Pot and then saute your onions for a couple minutes. Add your lamb and curry sauce and saute for another two minutes. From there, add two cups of water and cook on the “meat stew” setting. After you allow your Instant Pot to vent, remove the lid and add in your potatoes. Cook for another 5 to 10 minutes. Serve hot over some Basmati rice! If you want it to look fancy, garnish with cilantro for a picture-perfect dinner. 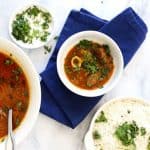 Lamb Rogan Josh is a delicious curry dish, traditionally made with red meat like lamb or goat. Rogan Josh gets its rich, red coloring from alkanet flower/root and Kashmiri chilies. We’ve got the easiest Lamb Rogan Josh recipe that lets you throw everything into an Instant Pot.

Rogan Josh makes for a hearty lunch or a filling dinner. Do you love the Instant Pot recipe or are you more of a traditional slow cooker? Be sure to tag us in your pictures of Lamb Rogan Josh!
Indian Breakfast Recipes
Chicken Tikka Masala Sliders