How to make the best South Indian Potato Masala!

This simple potato fry Indian recipe is made with boiled potatoes, red onion, oil, and spices! It’s commonly served as a main course for breakfast or brunch in Indian culture, but really, it’s delicious no matter what time of day you decide to eat it.

It’s often a known fact that South India is known for using a certain array of spices in its dishes, including turmeric, mustard seeds, and curry leaves — these of which are included in this recipe! To say that spices are important in Indian culture is an understatement. In fact, spices were used for things other than flavoring foods, such as curing ailments and preserving food.

While historically, this dish is big on flavor, you only need a handful of ingredients to make it, which I love. The spices included in this South Indian Potato Curry include two whole, dried red chilies, one teaspoon of mustard seeds, eight to ten curry leaves, and one teaspoon of turmeric powder.

How to Serve Potato Masala/Aloo Masala:

Once you’ve made your South Indian Potato Masala, there are a number of different ways to serve and enjoy! One of the most common ways — and my favorite way— is to serve with dosa, which is like an Indian crepe. To serve with dosa, make the South Indian Potato Masala first and set it aside. Then, make your dosa and set the filling on one side of the circle. Fold in half and enjoy!

Another way to enjoy your South Indian Potato Masala is to make Potato Masala with Poori! Poori like an unleavened wheat-flour bread that’s rolled into rounds and then deep-fried.

If you’re watching your carb intake, you’re probably wondering if there are carbs in potatoes. Carbohydrates break down into three categories: sugar, starch, and fiber.

Potatoes contain a lot of starch, so it’s important to pay attention to how many potatoes you’re eating if you’re a diabetic or have to keep an eye on your blood sugar for other reasons.

Potatoes are usually one of those vegetables you eat when you’re upping your carbs, as one medium potato contains 37g of carbs, which is 12% of your recommended daily intake. The moral of this is that potatoes in moderation make a delicious meal or side dish! 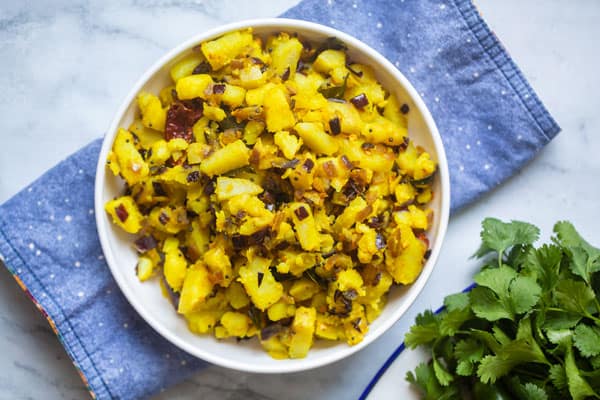 Those who are celiac or are otherwise practicing gluten-free eating will be relieved to know that potatoes are, in fact, gluten-free! Gluten is found in food items that contain wheat, barley, rye, and other grains – none of which are found in potatoes.

To make South Indian Potato Masala, heat oil in a thick pan. Add in chili, mustard seeds, and curry leaves. As it sputters, add in asafetida and turmeric and stir. Then, add in your onion and cook for three to five minutes on medium heat until they become translucent. From there, add in your potatoes and salt and mix well. Serve and enjoy! 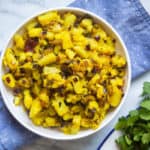 Those who are celiac or are otherwise practicing gluten-free eating will be relieved to know that potatoes are, in fact, gluten-free!
How to Survive Social Distancing With Kids
How To Stock Up Your Kitchen For A Month